The women’s tug of war team, composed of teammates of National Taiwan Normal University and students from Taipei Jingmei Girls Highs School, went to Cape Town, South Africa in September for the 2019 Tug of War International Federation Outdoor Club Championships. The team took back champion in the junior 480-kg contest as their first attempt and in total they have grabbed 5 golds, 4 silver and 1 bronze and kept the 500-kg title for 2 consecutive years; they also triumphed in the under-23 500-kilogram event and senior 540-kg weight class for two years in a row.
Students and alumni from Taipei Jingmei Girls High School and National Taiwan Normal University went to Castlebar, Ireland on September 2nd and the first game started in 5th, Taipei time. As usual, the first two days are open. In open games, multiple teams from one country are able to join and in tournament, the last two days, the games are between national teams.
The Chinese Taipei tug of war team has achieved great success in junior 480-kg contest, under-23 560-kg contest, under-23 500-kg event, women 560-kg event, women 520-kg event and junior mixed 520-kg. According to Athlete Department, the difficulties of this game is in the cold weather and muddy land. Athletes are trained in sunny weather in Taiwan and the land is very different from where they used to practice. The coach kept encouraging the athletes to show their power. 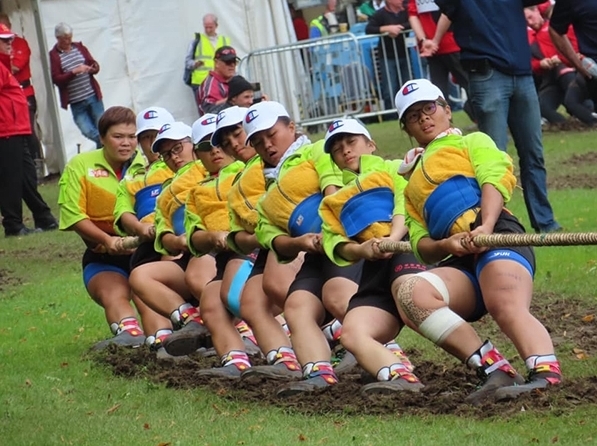